Twitter started pushing out a significant redesign on all platforms last week, aimed at giving the user a better experience and easier ways to connect with others. The Twitter website looks different, but I think it looks clean and polished, with each section in its own separate box. The refreshed iPhone Twitter app now boasts a @Connect tab, which allows users to see all recent interactions or simply mentions. When you look at the Interactions tab, you are privy to who has recently followed (finally!), retweeted, replied or otherwise interacted with you on Twitter. I love this addition because it is immediately effective. The interactions tab has already put me in contact with new followers, and helps me gauge the effectiveness of my tweets.

One complaint I have heard is that Direct Messages are no longer accessible from the bottom navigation bar, but as I rarely use them, I don’t see that being a huge issue. I do like, and am still a bit perplexed by, the #Discover tab. This is a big move in personalizing Twitter around you. It is designed to learn from your tweets, searches, follows and location to bring you interesting content. So far my top 3 recommended stories (with my reactions), are: “America’s Got Talent” (Not so interested.), “Golden Globe” (I like movies… Warmer.), “Lee Westwood” (Golf, now Twitter, you have my attention!). So after a few days of using the new layout, Twitter is starting to basically “know me.” I think the outcome of this #Discover tab will speak volumes on Twitters data mining and analytical capabilities.

Update: I was in the middle of writing this post, and Twitter has already moved the “America’s Got Talent” story down in priority (see below), under the other two. Now that’s what I like to see: Results!

One immediately effective addition to the #Discover section is the Activity tab. This shows who the people you’re following have recently followed or favorited. I clicked on the Activity tab and within 5 seconds had already followed two new people, showing again that the new Twitter has the potential to immediately put users in contact with others who share the same interests. This is yet another step forward toward creating a healthy and engaging atmosphere for discussion. 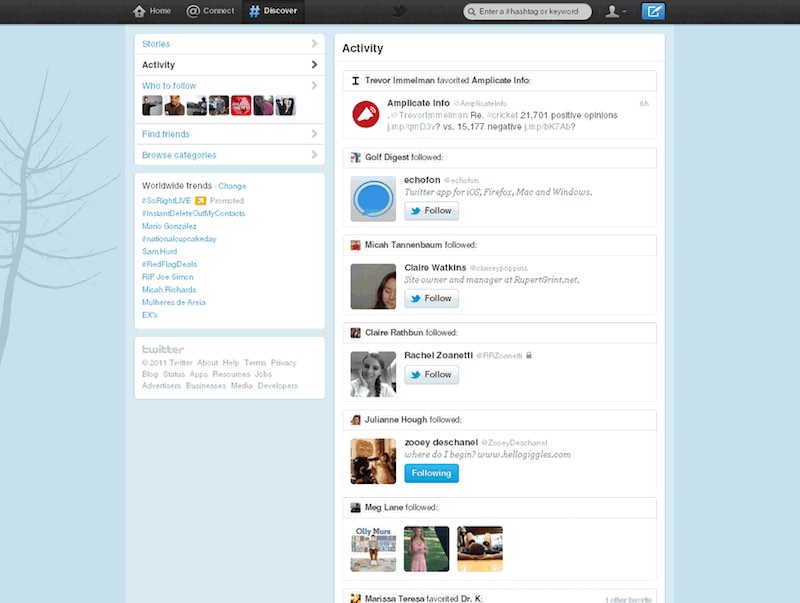 We already know that Twitter is a huge force for spreading news like wildfire, but I am excited to see how the new design helps users interact with other, like-minded “Tweeps.” The motivating force behind Twitter is the desire to be heard by friends, colleagues, pretty much the world. Once you are in contact with those people, they become your influencers. Twitter is harnessing the power of your current and potential influencers to drive the conversation, and in the end get users more engaged. Twitter is still evolving, and the new Twitter design pushes everyone to be a contributor, not just an observer, and for that it receives my stamp of approval.

You can read all about the Twitter redesign’s new features on Twitter’s Blog.

This site uses Akismet to reduce spam. Learn how your comment data is processed.

Let’s tell a story together.

I'd love to work with you to tell your story. Let's create something truly amazing!